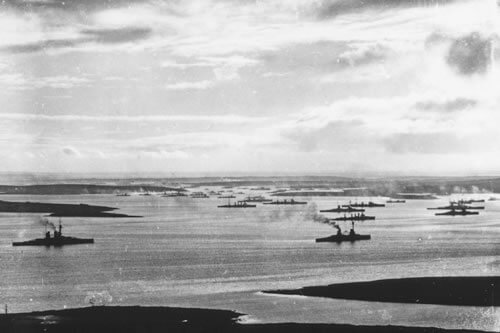 As dawn broke on Friday 17th June 2011, the nocturnal tranquillity was broken by the clatter of a turbo-charged diesel minibus being fired into life. A determined Bonner was at the wheel focused on his first diving trip toScapa Flow. The initial destination was Chateau Glen nestling in the suburbs of leafy Streatham. At this venue, other sleepy-eyed participants joined the party and we were off for in search of a comfortable overnight stay and a very welcome curry inHamilton, a relatively upmarket area on the outskirts ofGlasgow. Mason and Lucas had planned a further photographic/diving jolly to the remote Shetland Isles. Mason, therefore, was independently travelling in his dive-mobile with Proudfoot as co-driver. Lucas was flying viaAberdeen toKirkwall airport on Sunday, the final leg being by a turbo-prop Airfix model dating back to the early sixties.

The assorted modes of transport to the Orkney Isles all proved to be remarkably reliable and a crew of enthusiastic divers were all well rested and very keen to start their underwater adventures. Two experienced and well qualified diving chaps from Colchester BSAC had joined us to help fill the boat. They both blended in very well and would both be most welcome to join any future trips.

After (and between diving), we visited a number of the tourist attractions in the Orkney Isles. These included Lyness – naval museum, Maeshowe – Orkney’s finest chambered cairn and Skara Brae – an amazing Neolithic settlement. On 21st June we encountered a number of modern day Druids at the Ring of Brodgar. They were clothed in impressive velvet robes and flowing capes. Finely carved staffs were in evidence but no sharp knives suitable for human sacrifice.  My own favourite après-diving excursion was to the Tomb of the Eagles where apart from the pre-historic interest we experienced some of the very finest breathtaking views of the UK coastline.

A visit to the Highland Park distillery was also included on the itinerary. Diving and consuming alcohol are clearly incompatible. Nevertheless, Proudfoot and I had both been hoping to enjoy sampling of some of the very finest of the vintage single malts in the cellar. This was not to be. We were only invited to partake of an end of tour dram. It was very nice. This evening excursion took place after all diving for the week had been completed.

Loading and unloading of cargo from our chosen diving vessel MV Sunrise took place in an extremely efficient manner. The HR departments of many major companies would have been amazed by the team spirit, effectiveness and efficiency with which this was achieved. Similar team spirit was apparent in the preparation each day of breakfast. Each buddy pair took it in turns to man the galley.

Scapa Flowis rightly acknowledged as offering the best wreck diving in the northern hemisphere.  I have uploaded to You Tube various clips that were taken during my own underwater adventures as an indication of what is on offer.

The only dark humour that occurred during the trip (apart from my own dry suit that did an extremely creditable impression of a clapped out sieve) involved Mason, the Club’s respected Chairman.

Unlike many divers who hold their reels in a firm grip whilst deploying a DSMB, Mason has adopted the bizarre technique of casting aside his treasured, personalised and very expensive Kent Tooling, laser cut, 316 grade stainless steel reel whilst the buoy ascends. This strange practice provides a degree of entertainment as the reel unwinds. Sadly for the unfortunate Mason, he failed to spot a porthole into which his pride and joy disappeared. With a swift flip of his fins, Mason was on the scene and quickly wound the remaining 90 metres (!!!) of line around his forearm and retrieved his reel. A number of the local fishermen were later entertained by the sight of a number of the crew helping Mason to unravel his knitting.

This year due to the weather we acted on sound advice from the skipper to confine our escapades toScapa Flowitself and not to explore the lesser known wrecks in the Northern Isles and at Stack Skerrie. This was a great disappointment.Sunriseis a converted trawler that would be more than capable of enduring heavy seas. It is unlikely that the crew would have proved as robust.

Glen’s decades of experience organising trips toScapa Flowproved invaluable to ensure that maximum benefit was gained from the trip. All members of the crew expressed their appreciation at the final evening meal in the Royal Hotel in Stromness. Well done that man!