After looking forward to Paul Brown’s annual Easter jolly to Plymouth, this unseasonable and awful weather scuppered things before they even got started!

Pete Fergus the skipper gave us just under a weeks notice that it wouldn’t be worth travelling down as we were unlikely to get out at all over the weekend! We were all gutted to be missing out on a long relaxing weekend, great company, good diving, nice pubs and of course fine dining courtesy of the Ganges…. 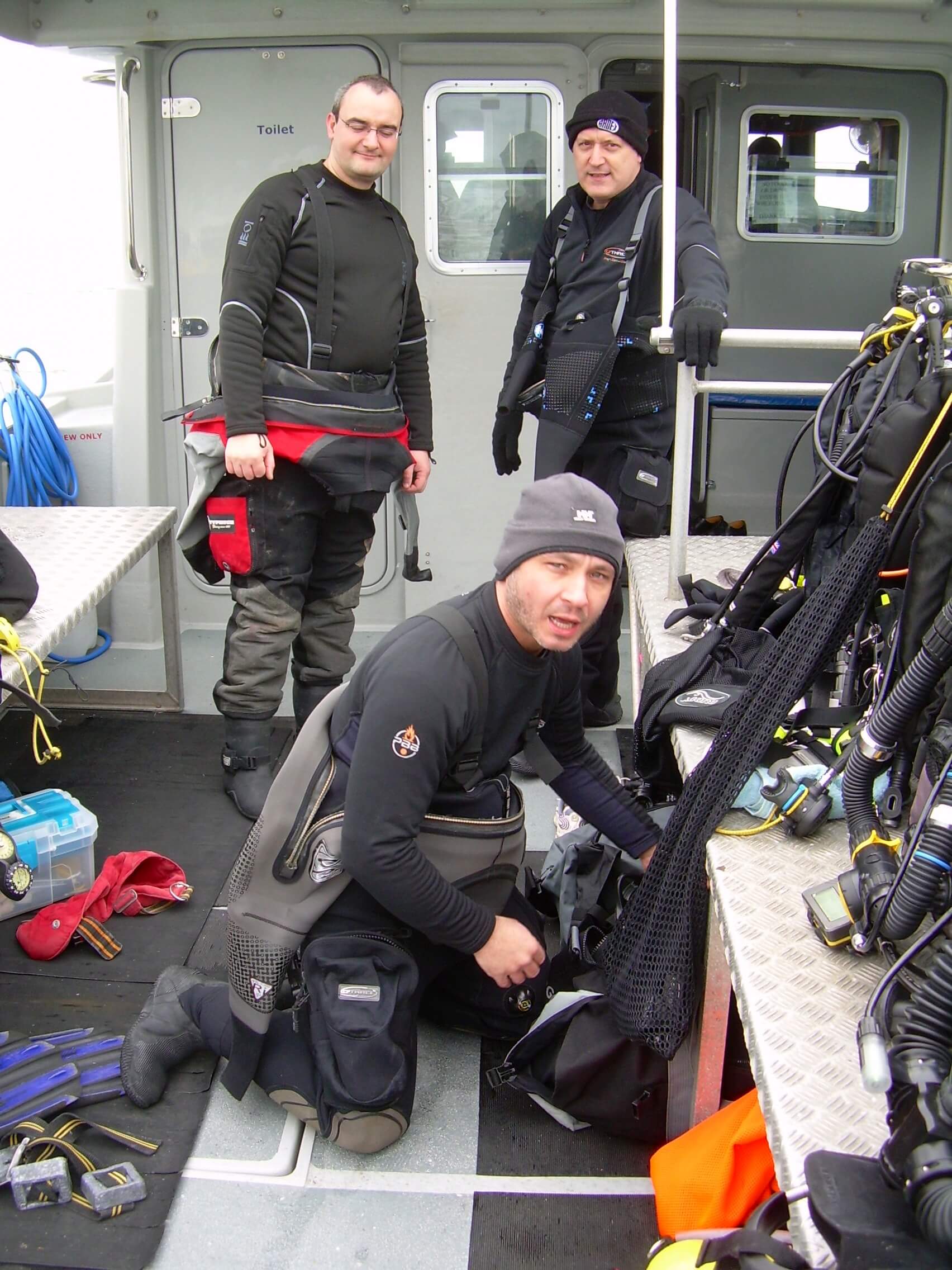 With the weather in Plymouth looking so ropey I was surprised to see the conditions in Brighton looking slightly more favourable for Friday, Saturday and maybe even Sunday. I checked with Marc Dellow if we still had spaces for Friday’s club dive and there was, so Martin Bonner and I put our names down. If nothing else we might at least get a dive in over the weekend although not quite what we’d planned.

I was then duly nominated the Dive Manager as no one else had volunteered! Unfortunately Szymon succumbed to a cold and had to pull out the morning of the dive. Therefore the crew now consisted of Martin Bonner, Marcin Grabowski, Jason Street, Jonathan Taylor, me and non club members Amy Shores plus Paul and Desha from Newbury.

We arrived at Brighton marina around 8.45am shortly followed by Jason, Marcin and the others.With plenty of time and space to load up on Channel Diver, grab a coffee and kit up for a very reasonable and relaxed 10am ropes off. A quick sightseeing tour of the marina and Steve Johnson’s new berth as of next month (be aware). Apparently there’s a massive complex of flats being built right on top of Steve’s present berth right back to and beyond the Yacht club! Loading at the new berth should actually be easier in future according to Steve.

With cold overcast conditions and a steady breeze we hugged the coast until around Beachy Head then headed out towards the Braunton and a sloppy sea. After giving an informative and enthralling dive brief…… it was time to get ready to jump in for a slack at around 11.45am. Buddy pairs in dive order were Jon and Amy(CCR), Jason and Martin(Twinset), Paul and Desha(CCR) followed by Martin and I also on twins. Unfortunately just before jumping in Desha had a free-flow on her CCR and lost most of her Diluent gas so her and Paul decided to bin the dive.
We quickly finished kitting up and jumped in.

As expected with all the inclement weather we’d had the visibility was pretty poor, 2-3 meters max. Any ambient light disappeared at around 5-6M. The wreck sits upright and sections of the wreck stand proud of the seabed the bow and stern mainly. We dropped down to around 36m but spent most of the dive just above that as we were both on air and didn’t relish the thought of a long deco stop in 6 degree water. Didn’t really rummage around too much in the holds as the vis was bad enough. This is the 2nd time I’ve dived this wreck but I’ve yet to see any of the main cargo which apparently was almost 2,000 tons of live shells and ammunition! A fair bit of life on and around the wreck, lobsters, crabs, an abundance of small anemones even a small cod alas no scallops.

I sent the DSMB up after around 30 mins, as that was about as much as we could take of the cold! A few mins deco and time to surface with no dramas. Back on board, tea waiting but no biscuits(the service is slipping)! Everyone back on board, safe but cold we headed back towards Brighton. Due to the cold and after a quick vote it was unanimously decided to give the 2nd dive a miss. We arrived back into the marina around 3pm and the sun came out, bloody typical!!

Hopefully the weather will improve soon and we can get back to the normal flat calm seas, balmy days relaxing in the sun, 30m vis and world class channel diving, well we can live in hope…onwards and upwards!! 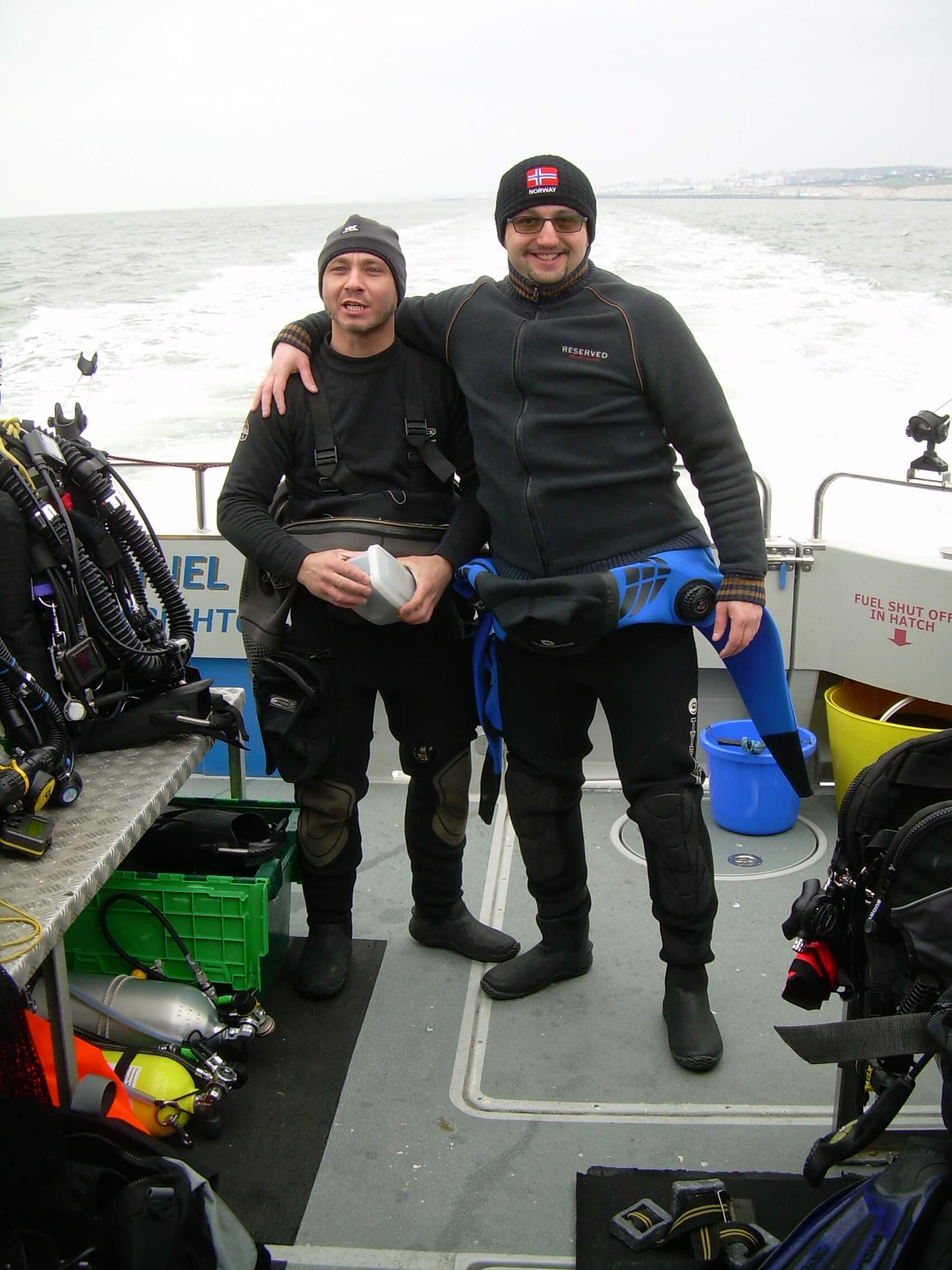 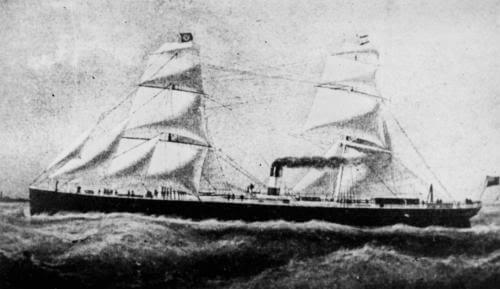