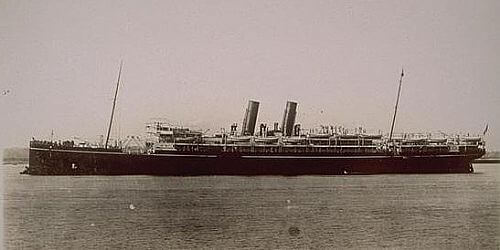 7am ropes off is never what you want the conspiracy of moon sun and sea to have plotted as your Sunday morning fate, but the chance to dive the Moldavia can entice any diver to manfully walk the plank onto Channel Diver despite a force 5 on the horizon. 12 not so angry men, despite the hour, did just that last Sunday and were rewarded for their efforts.

Although the Moldavia is by no means the deepest wreck many of the experienced divers on board were used to diving, it is in that range where clear planning for bail-out, accelerated decompression and other considerations become even more critical. Slates were cut, bungeed computers galore made ready for the jump and more O2 on board than you’d find on a geriatric ward in an Eastbourne hospital.

I jumped in with Mark Breare, both of us having exchanged several phone calls and emails to discuss runtimes. Mark had opted on 23/15 and I took the miserly option of air (well, 22.5%). After a while, comparing runtimes can seem a bit like choosing lottery numbers, but there must be method in those figures since the slate got out of the water almost to the same minute as our computers. (I suppose I should add that the slates were cut from V-Planner while we both used Suuntos. A distinct difference in conservatism is obvious.)

It took about two and a half hours to arrive on site and we were giant striding at just after 10am. Steve dropped the shot near a 6-inch gun towards the stern which we had decided would be the limit of our exploration. We hit the seabed at about 47m where we had about 5-8m vis, and then we spent most of the dive between 42-45m. We saw the capstan, what looked like another gun, a plethora or portholes and some rather large pollack. It would have been ever so tempting to venture inside some parts but we’d agreed beforehand this was strictly verboten.

Mark bagged off at about 40m with a textbook deployment before we made our way to 12m and onto 70%. Steve had asked us all to use our DSMBs so I deployed from about 10m. I never like doing that since your lines can get intertwined and you get back on board looking like a right pair of numpties. Oh, I suppose it might be dangerous too.

While decompressing it was clear that surface conditions had changed. In fact it seemed as though the surface cover was tugging on our lines it was so choppy. As indeed it was. In the one hour since descending it was now stair rods and Channel Diver was being tossed like a cork. This made for a challenging egress, but a safe one nonetheless.

Everyone made it back on board the only incident being Andris’s Sentinel springing a leak after about 30mins forcing him to bail out. He seemed very calm about the whole thing. Hmmm, rebreathers? I wonder what the verdict our of 12 divers would be on the case. A hung jury I suspect.

So, despite the early start, we all enjoyed a good dive. Yes, it is a lot of bother for only 25 minutes on a wreck that needs so much more attention.